Just When You Thought I Was Back...

Yeah, I've been back a couple of days. Trying to regroup and get ready for this weekend. Blogging will be light because I'll be hanging out with bloggers. Funny how that works, eh?

Not a Good Day

A year ago today, my grandmother passed away. My aunt, her oldest daughter, passed away this afternoon.

I have a feeling that I will come to dread the arrival of April 18th in years to come.

Please keep my cousins and uncle in your prayers, as well as my mom and her younger sister.

A Loss in the Family

Early this morning, Gunny, one of our bearded dragons, passed away. Although we're not entirely sure why, one possible cause was an allergic reaction to something (but we're not sure what). The boys are handling it pretty well, all things considered.

This afternoon, we cleaned out the cage and are sanitizing everything (we have another beardie who lives in there, too).

It would be easy to dismiss the boys loss... I mean, it was just a lizard, right? Sure, but she was T1's lizard. She was mellow and easy going... unless I was around. She didn't seem to like me all that much. She bit me more than once, and she... um... uh... left a little gooey present on my shirt once. She was nice that way.

Psych! The enlightened ones who want more understanding and less detonating have a new petition- this one to encourage the Bush Administration not to bomb Iran into the Stone Age just because Mad Mahmud wants his own personal toy nuke.

We write to you from all over the United States and all over the world to urge you to obey both international and U.S. law, which forbid aggressive attacks on other nations. We oppose your proposal to attack Iran. Iran does not possess nuclear weapons, just as Iraq did not possess nuclear weapons. If Iran had such weapons, that would not justify the use of force, any more than any other nation would be justified in launching a war against the world's greatest possesor of nuclear arms, the United States. The most effective way to prevent Iran from developing nuclear weapons would be to closely monitor its nuclear energy program, and to improve diplomatic relations -- two tasks made much more difficult by threatening to bomb Iranian territory. We urge you to lead the way to peace, not war, and to begin by making clear that you will not commit the highest international crime by aggressively attacking Iran.

So far, they have a few thousand submissions, and some of the comments are... priceless... One person even suggested eliminating all of the Bush supporters (Elaine, #4860). Fortunately for her, someone pointed out that the Bush supporters are the ones with the guns.

They honestly think that the President wants to go to war... again. Yeah... he just loves the idea of putting our military at risk... it's a big rush for him, I'm sure. Then again, they think that signing an on-line petition, referring to him as a criminal and calling for "regime change" in the United States is the way to get the Administration to take them seriously.

Good luck with that. Really.

The Early Bird and All That

Remember back in grade school, when that one kid... you know the one I mean... would always jump to the front of the line? No matter what it was... go to recess, go to lunch, take a quiz... s/he always had to be first. Looks like the DNC has their very own "me first" kid...

WHO: Mike Gravel for President 2008

WHAT: Press Conference where former United States Senator Mike Gravel (D-Alaska, 1969-1980) will announce his Candidacy for the Democratic Nomination for President of the United States.

Paid for by Mike Gravel for President 2008

You know, I was really hoping we could get finished with mid-terms before we started with all this fun.

Let's see... Senator Gravel will be celebrating his 76th birthday next month... which will make him 78 years young at the time of the election. (OK... he'll get the AARP vote). While a Senator, he wrote a book advocating a "guaranteed annual income" whether or not the person actually worked. (uh... isn't that called... what is that word???? oh, yeah... WELFARE?) He's behind a "National Initiave for Democracy" which tried to introduce a Constitutional Amendment to allow "voter initiated federal legislation" (which would be cool... if we lived in a democracy... which we don't... and, yeah... that's what we need... more legislation.) Oh, yeah... and he's the moonbat that had the Pentagon Papers published.

Unless Kucinich runs again, this guy might be the most fun we have... but I'm sure the DNC will come up with some other fun and frivolity for us.

(I'd give a h/t... but I can't remember where I got this from first) I guess they're just tired of ignoring the obvious... 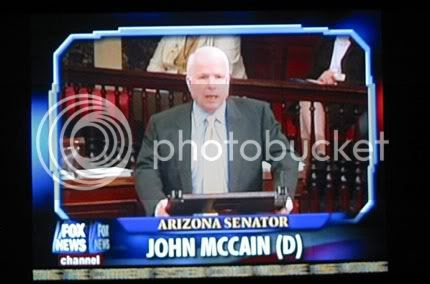 Got this from Eric...


Link: The If You Were A Beer Test written by gwendolynbooks on Ok Cupid, home of the 32-Type Dating Test

Is This For Pick Up or Delivery?

In Alaska, it's probably for delivery...

A tiny delivery joint, Airport Pizza, had opened several months earlier just steps from Nome's busy runways, and many of Savoonga's 700 residents were eager to try more than conventional pepperoni and plain cheese.

Nome's first and only pizza delivery service does a robust business in the western Alaska town of 3,500. But it really stands out for its free deliveries via commuter plane to more than a dozen other remote subarctic villages spread over a region about the size of Washington state.

Why do I get the feeling they don't guarantee a delivery time?

This is a great idea. Maybe they need to open a take-out Chinese place in the airport, too? Or several fast food places? Give them a bunch of choices. This could be big business... no, really...

No Way To Spend a Weekend

Migraine Saturday... Stomach flu Sunday... Ginger Ale and saltines are my friends... (and T1 makes a mean mug a chicken broth, and T2 is an awesome care-giver).

How was your weekend?

With a Little Faith

If you could fill in at any job, for just a day, what would it be? What job would be your dream come true?

It was a dream come true for a fan of Motley Crue. For one night, he filled in for injured drummer Tommy Lee.

"After playing multiple shows wearing a brace and taking anti-inflammatory injections, Tommy Lee's doctor instructed him to give his injured right-hand wrist a break after his tendinitis made it difficult for him to perform," Englefield said.

Warren, a Calgary resident who manages a Starbucks by day, moonlights as a drummer in the Canadian Motley Crue tribute band Broken Toyz.

Lee, 43, hopes to return for a concert Friday in Prince George, Englefield said. There are six dates left on the tour.

Take a look at the guy's picture- he looks like Tommy Lee. Maybe even more like Tommy than Tommy has been looking lately.

Rep. Cynthia McKinney just gave an "apology" on the House floor for the incident with the Capital Police officer last week. Sort of...

Rep. Cynthia McKinney, D-Ga., expressed "sincere regret" Thursday for her altercation with a Capitol police officer, and offered an apology to the House.

"There should not have been any physical contact in this incident," McKinney said in brief remarks on the House floor. "I am sorry that this misunderstanding happened at all and I regret its escalation and I apologize."

Think You Know Me?

I got this from a non-blogger friend.

How well do you know me? For instance, did you know...?

Five places I have been on vacation:
1. Wisconsin Dells, Wisconsin
2. Chattanooga, TN
3. London, England
4. Niagara Falls (the Canadian side)

Four places I would rather be right now:
1. Belleville, IL
2. with close friends
3. in the garden
4. catching up with old friends (like the one who sent me this)

Four people who I have tagged that I think will respond:
(I'm not going to tag anyone... I know how much y'all hate that... but I'd love to see responses from some of you... if you do this, leave a link in the comments, ok?)

OK... so I got this from RightWingSparkle, who got it from Powerline, and... where do I get the cd? Play it... you know you're curious... it's a cross between "We Didn't Start The Fire" and "nyah, nyah, nyah, nyah, nyah"... entitled "Bush Was Right." The Right Brothers are pretty darn good.