The Military Times has announced the "2005 Service Member of the Year."

The Purple Heart on Kent Padmore's chest isn't for the shrapnel from an enemy rocket-propelled grenade that tore a cheek-to-cheek gash across his face. That wound was never documented; Padmore fixed it himself with a liquid suture in the rearview mirror of his Humvee. Padmore, a Marine reservist, works in civilian life as a City of Miami Fire-Rescue Department emergency medical technician, so he knew what to do. He patched himself up because he didn't want to steal precious time from the corpsmen in his unit, who were busy treating more seriously wounded Marines. Instead, the Purple Heart he wears is for the second-degree burns on his hands and arms he suffered while dragging 10 Marines out of the burning wreckage of a 7-ton truck on June 23, 2005.

And people think we might lose this War? Not with service members like Staff Sgt. Kent Padmore.

This Is So Wrong

BROKEN ARROW, Okla. A Broken Arrow man is charged with public nudity and indecent exposure after being arrested twice while working on his car in his yard _ naked.
James Barnett was first arrested after a 9-year-old boy riding his bike saw him naked and told his mother who called police.

Barnett was arrested a second time when the officer who made the first arrest drove by the home while responding to an unrelated call and saw him again in the nude and working on his vehicle.

Police say Barnett's only explanation is that he was very hot so he took his clothes off to cool down.

I Guess That Sums It Up 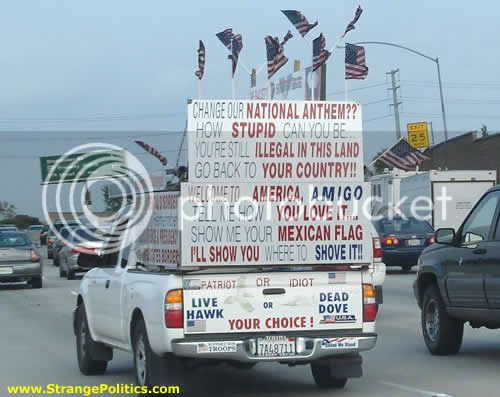 Blame My Mother For This One

NEW YORK -- A public school teacher was arrested today at John F. Kennedy International Airport as he attempted to board a flight while in possession of a ruler, a protractor, a set square, a slide rule and a calculator.

At a morning press conference, Attorney General Alberto Gonzalez said he believes the man is a member of the notorious Al-gebra movement. He did not identify the man, who has been charged by the FBI with carrying weapons of math instruction.

"Al-gebra is a problem for us," Gonzalez said. "They desire solutions by means and extremes, and sometimes go off on tangents in a search of absolute value. They use secret code names like 'x' and 'y' and refer to themselves as 'unknowns', but we have determined they belong to a
common denominator of the axis of medieval with coordinates in every country. As the Greek philanderer Isosceles used to say, 'There are 3 sides to every triangle'."

When asked to comment on the arrest, President Bush said, "If God had wanted us to have better weapons of math instruction, He would have given us more fingers and toes."

Happy Birthday, Mr. President. And many, many more.

... when the doctor uses the word "miracle" in the conversation.

T1 had a follow-up with the corneal specialist for his nasty eye infection. He has a 3mm x 3mm scar mostly out of his field of vision, and he's already recovered most of his vision. We are supposed to slowly taper off the eye drops, and he goes back to the doctor in a month. His only restriction is no swimming.

Now, I think we can all breathe a sigh of relief. Thank you for all of your prayers.

The Trouble WIth Tribbles...

In a windowless warehouse in Crotona Park East, boxes of "Star Trek" memorabilia that were shipped from the part of the galaxy known as Hollywood are being cataloged and photographed. The catalogers and photographers work for Christie's, the auction house that more often handles impressionists and old masters.

The trove will be sold for dollars. Not Federation credits.

...Consider this one, for a pair of items that Christie's expects to sell for $1,000 to $1,500: "Two tribbles of imitation fur stuffed with foam rubber, one gray and black, the other white, gray and brown."

There will be items for auction from approximately $200 on up. You know some Trekkie in a Federation uniform will pay good money for Kirk's uniform... or Worf's rifle... or a model of any of the Enterprises. They're all for sale.

When we were at my parents' house, Mom, Grandma and I went to the Missouri Botanical Gardens to see an art exhibit.

Glass in the Garden brings the work of renowned artist Dale Chihuly to St. Louis in a custom-designed exhibition dramatically installed within the natural landscapes of the Garden.

A few years ago, a friend of mine told me about this artist who worked with glass. He had an exhibit at the OKC Art Museum, and I should check it out if I was up there. Well, I was up there, and I loved it. So, when Mom told me that Chihuly had an exhibit at the Botanical Gardens, I really wanted to check it out. Here's one of my photos from the exhibit: 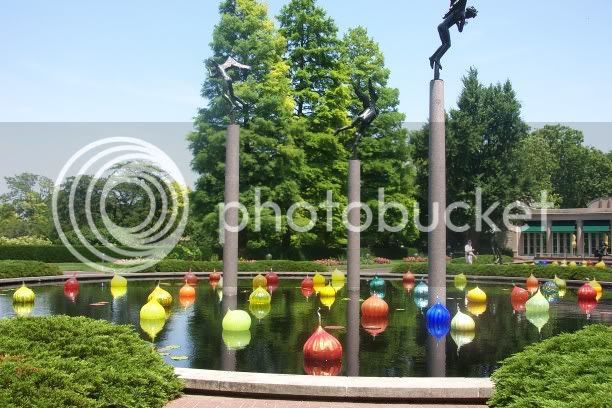 Yes, those are all glass "onions" in the reflecting pond. In the evenings, they are illuminated, which must look amazing.

Here's a photo of Mom's favorite piece in the exhibit: 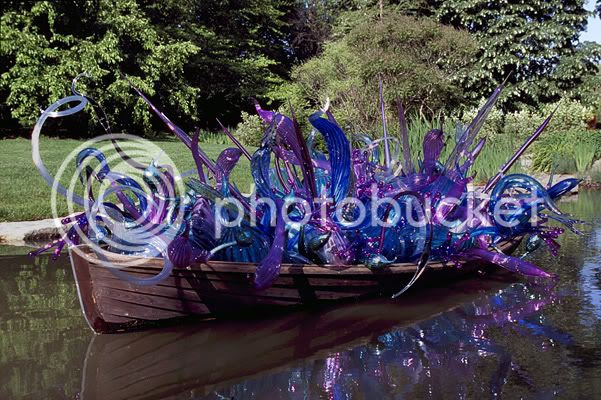 photo courtesy of Chihuly.com
If you're in the St. Louis area this summer, take the time to see this installation. I know it's a little pricey, but... it's worth it. And, better yet, go back again on a Thursday evening for "Chihuly Nights" and see all of the pieces illuminated.

Revenge of the Birds?

Last summer, during Discovery's launch, the External Tank hit a bird. Yup... the Shuttle went head-to-head with what was probably a turkey vulture (which like to hang around the launch pad for some reason). Here's a pic: 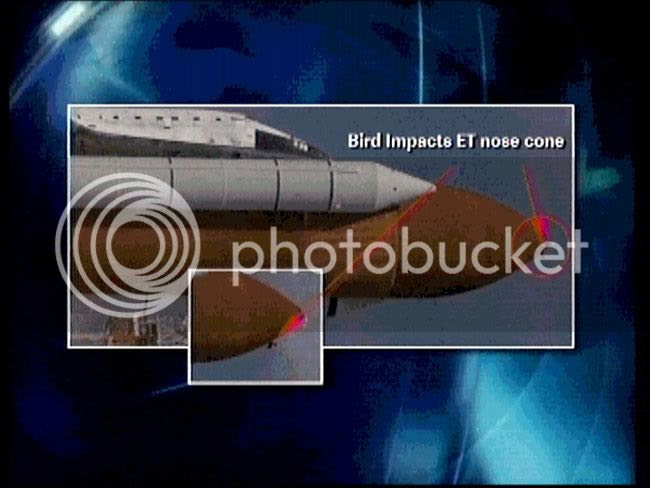 I don't have to tell you who won that game of chicken, do I?
Anyway, since the Shuttle did have a little bit of tile damage after the last launch, Mission Control had the crew do a major once over, and they found some white streaks on the leading edge of the wing that concerned the crew a bit. A quick call to MC eased their fears... it's just bird droppings.

Shuttle lead flight director Tony Ceccacci said he saw the same splotches on the identical part of the shuttle about three weeks ago when Discovery was on the launch pad and laughed when pictures beamed back from space Wednesday showed they were still there.

That means these bird droppings withstood regular Florida thunderstorms, a mighty Fourth of July launch during which 300,000 gallons of water is sprayed at the shuttle's main engines, and a burst upward through Earth's atmosphere. During that launch Discovery went from zero to 17,500 mph in just under 9 minutes.

And still the bird droppings remained in place. Mostly.

A reporter asked Ceccacci how close of a look they got at the bird bombs and if he could be sure if it really was birdy turdy. Ceccacci said they were within five to ten feet, but, "if you're asking if we touched it, no."

They're just going to let the droppings burn off during re-entry. I guess they can't find a big enough car wash up there, eh?

It's not the 4th of July anymore. I realize it was a bit rainy last night, so everyone couldn't fire off every last bottle rocket in the arsenal... but... this is the 3rd night in a row... we can be done now, right?

They'll Let Anyone In, Won't They?

Fellow blogger RWR brought something quite interesting to my attention. Townhall.com just underwent a major overhaul (ok... I knew that part already), and, as a part of it, they opened up an area for blogs. Not just the blog for their writers (Hugh Hewitt, Mary Katherine Ham, etc), but one for everyone else as well.

Well... I couldn't resist... so... here it is... It's going to be place for me to post my more serious posts (politics, religion... all that fun stuff). Never fear... if you keep coming here, you'll get all of it... the Townhall site is just for the "brainy" stuff.

And, yes... I know I could just get my own domain. I may do that someday... but not today.

So... we put a pond in our front flower bed which increased the house's curb appeal, and we get a nastygram from the Homeowners Association. We leave out the basketball hoop in our driveway for a couple of days, and we get a nastygram. We forget to use the weedeater on a part of the yard that you can't see from the street, and we get a nastygram. At least 5 houses around us launch bottle rockets and Roman candles and who knows what else (in clear violation of all of the "NO FIREWORKS ALLOWED" signs posted ALL over the place) and not a dang thing will happen.

I'm not against fireworks. FAR from it. I love fireworks. I love firing them, watching them. The whole bit. It's that whole "shooting them off in the middle of a crowded neighborhood" thing that I have a problem with. It's dangerous.

My dogs go nuts, and I won't get to sleep until 2am, but that's ok, because they're not breaking the important rules, I guess.

The 4th of July

Have fun. Grill some dead animal. Celebrate our freedom.

And There They Go

After a couple of weather delays, Discovery lifted off the pad. The MSM is calling it "historic" because they've never had a Shuttle launch on the 4th of July. It's historic because the STS hasn't been scrapped yet. They need to retire the old birds and get the Ares system going. Don't get me wrong... I love the Shuttle. I have for over 25 years. Not the point. The shuttles are getting old... and there are only so many upgrades you can make on a system that complex.

God Speed to the astronauts. Have a good time. Be safe.

The List™ I'm referring to is the list of companies/products I won't be buying due to stupid marketing. The latest addition is HeadOn. If you haven't seen/heard the commercial, it shows people applying this stuff to their foreheads, and a voice repeating... OVER AND OVER... "HeadOn, apply directly to the forehead."

I've figured out the marketing plan, though. The commercial is SO annoying that is causes a headache. Then you'll remember that there's this stuff that you can put on your forehead to help your headache, and you go and buy some. Uh... sure...

You know... I remember when MTV was born... and I'm just wondering... when did Music Television stop playing music???